The Ritz Theatre, located at 30 S. Washington Street in Downtown Tiffin, is excited to announce the lineup for the 2022-2023 season! They have planned a season full of amazing entertainment and the minute the curtain opens, the show is sure to be stolen. Explore the acts, get your tickets, and prepare for memories that last a lifetime to be made! Ticket subscription renewals begin July 11, new ticket subscriptions sales begin July 25, and single event ticket sales begin August 8. The Ritz Theatre will see you soon, it's showtime! Tickets can be purchased and more information can be found on their website at ritztheatre.org 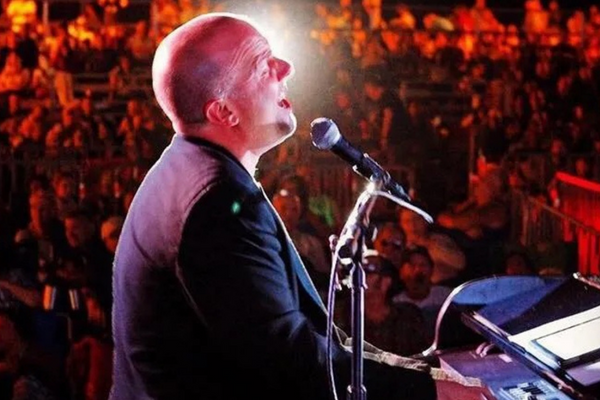 David Clark's All About Joel - a Tribute to Billy Joel

Saturday, October 1, 2022 | 7:30pm  - David Clark’s “All About Joel” – A Tribute to the music of Billy Joel, is a musical tribute conceived and presented with a tremendous amount of detail by Long Island veteran singer/piano player David Clark. He continues to gain notoriety with stunningly accurate piano playing, lead vocals, and an eerily similar stage look to the Piano Man himself while engaging the audience with wit and humor. Hear all your favorite Billy Joel songs including “Just The Way You Are,” “New York State Of Mind,” “Piano Man,” “You May Be Right” and many more. | Sponsored by: Old Fort Banking Company 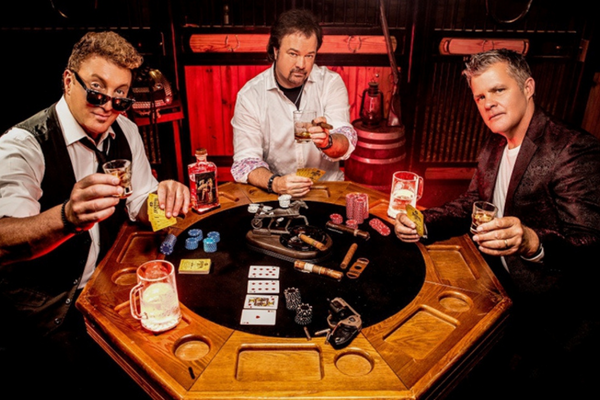 The Frontmen of Country

Saturday, October 8, 2022 | 7:30pm - Featuring Richie McDonald, Larry Stewart, and Tim Rushlow. From their rave review performances around the globe for our troops, to casinos, fairs and corporate events, to their globally televised performance on the steps of the hallowed Lincoln Memorial in Washington, DC, The Frontmen are making their mark on the Country music scene. With their combined amazing vocal and instrumental talents, The Frontmen deliver a high energy show packed with fan-favorites from their three award-winning and critically-acclaimed bands, and also songs from some of the artists who have influenced them. The Frontmen deliver a truly one-of-a-kind concert experience. | Sponsored by: Blanchard Valley Health System & Roppe Corporation 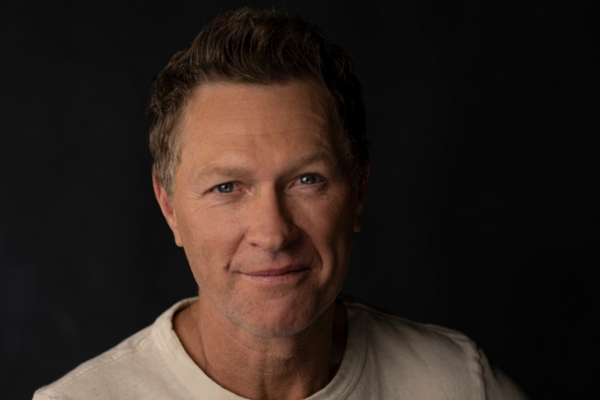 Saturday, November 5, 2022 | 7:30pm - A multi-faceted entertainer, Craig Morgan has made a name for himself as a country music icon, TV personality, celebrated outdoorsman and patriotic Army veteran. One of country music’s best-loved artists, Morgan has charted 25 songs on Billboard and thrills massive crowds with signature hits including “Bonfire,” “Almost Home,” “Redneck Yacht Club,” “International Harvester,” “This Ole Boy,” “Soldier,” “Wake Up Loving You,” “That’s What I Love About Sunday” and his faith-filled tribute to his son Jerry, “The Father, My Son and The Holy Ghost.” | Sponsored by: Blanchard Valley Health System & Roppe Corporation 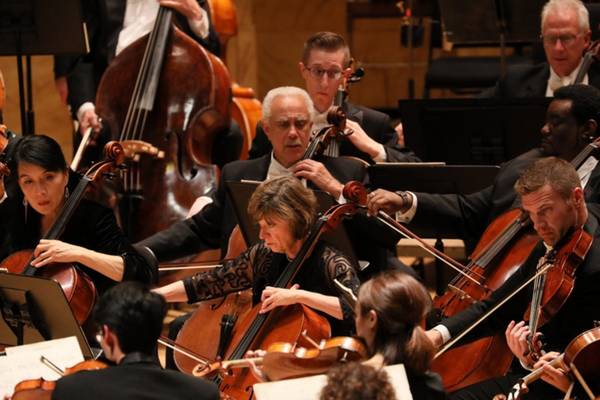 Thursday, December 15, 2022 | 7:30pm - The Toledo Symphony is a community-supported organization that is an exceptional musical presence for the region, creating a home for music education for all. The holiday show will include a collection of seasonal classics and traditional favorites for all ages. | Sponsored by: Mercy Health - Tiffin Hospital 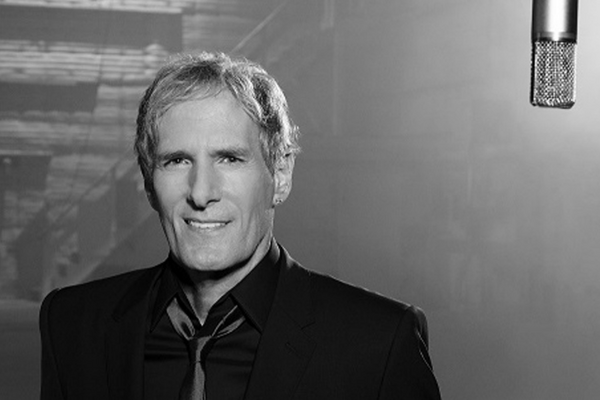 Sunday, December 18, 2022 | 6:00pm - Michael Bolton is a multiple Grammy Award-winning Singer, Songwriter and Social Activist, who has sold more than 65 million records globally and continues to tour the world.  Bolton remains committed to humanitarian causes, especially through the Michael Bolton Charities, now in its 25th year. In recognition of his artistic achievements, Michael won 2 Grammys for Best Pop Male Vocal Performance (nominated four times), 6 American Music Awards, 3 Emmy nominations and a Star on the Hollywood Walk of Fame.  As a songwriter, he has earned over 24 BMI & ASCAP Awards, including Songwriter of the Year, 9 Million-Air awards, and the Hitmakers Award from the Songwriters Hall of Fame. With 9 #1 singles, Michael has seen 9 studio albums rank in the Top Ten, including his 28th CD, “Songs of Cinema, ” a tribute to beloved songs from the world’s most iconic films. | Sponsored by: National Machinery Foundation 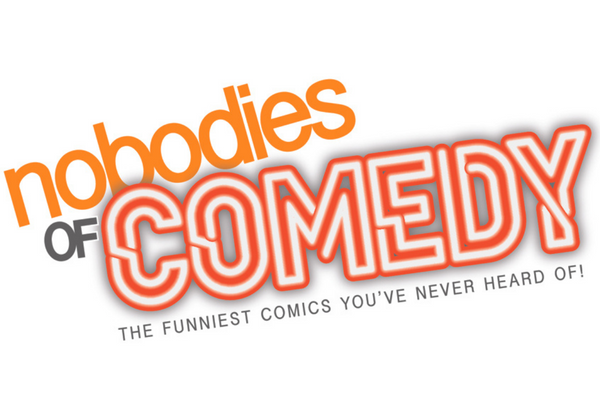 Saturday, January 28, 2023 | 7:30pm - You’ve never heard of them…but hey, they’ve never heard of you either! Here’s your chance to see the funniest up-and-coming comedians in America. We’ve hand-picked these comics from the best unknown talent from across the country and rolled them into one hilarious show. They may be a bunch of nobodies…but not for long! Don’t miss this chance to see tomorrow’s stars of comedy today. (Intended for mature audiences only) | Sponsored by: Clouse Construction & Reineke Family Dealerships 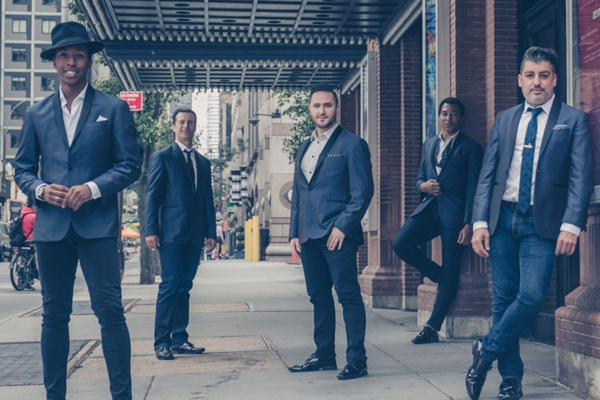 Saturday, February 12, 2023 | 3:00pm - Love the classic sounds of Frankie Valli, The Drifters, The Del Vikings? Ever wonder what Maroon 5 would sound like if they had lived in the Doo Wop era? The Doo Wop Project begins at the beginning, tracing the inception of group singing developed by inner city African Americans performing tight harmonies on a street corner to the biggest hits on the radio today. In their epic shows DWP takes audiences on a journey from foundational tunes of groups like the Crests, Belmonts and Flamingos through their influences on the sounds of Smokey Robinson, The Temptations, and The Four Seasons all the way to DooWopified versions of modern musicians like Michael Jackson, Jason Mraz and Maroon 5. Featuring stars of Broadway’s smash hits Jersey Boys and Motown: The Musical. | Sponsored by: Republic Lumber & Blanchard Valley Health System 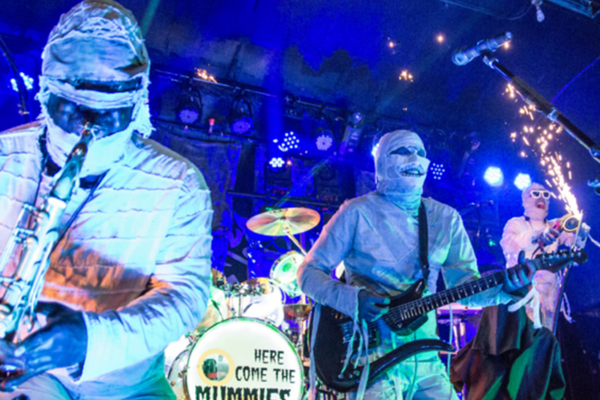 Friday, March 10, 2023 | 7:30pm - Back by popular demand, Here Come The Mummies is an eight piece funk-rock band of 5,000 year-old Egyptian Mummies with a one-track mind. Their “Terrifying Funk from Beyond the Grave” is sure to get you into them (and possibly vice versa). Some say they were cursed after deflowering a great Pharaoh’s daughter. Others claim they are reincarnated Grammy-Winning studio musicians. Regardless, HCTM’s mysterious personas, cunning song-craft and unrelenting live show will bend your brain and melt your face. (Intended for mature audiences only) | Sponsored by: Blanchard Valley Health System & Reineke Family Dealerships 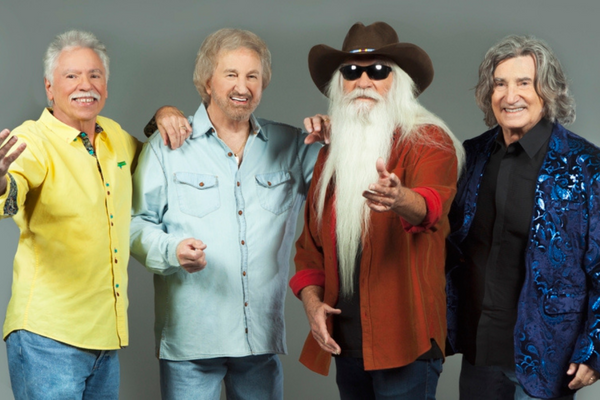 Saturday, March 18, 2023 | 7:30 PM - Theirs is one of the most distinctive and recognizable sounds in the music industry. The four-part harmonies and upbeat songs of The Oak Ridge Boys have spawned dozens of Country hits and a Number One Pop smash, earned them Grammy, Dove, CMA, and ACM awards and garnered a host of other industry and fan accolades. Every time they step before an audience, the Oaks bring four decades of charted singles, and 50 years of tradition, to a stage show widely acknowledged as among the most exciting anywhere. And each remains as enthusiastic about theprocess as they have ever been. Hits include “Elvira,” “Bobbie Sue” and “American Made.” | Sponsored by: Blanchard Valley Health System & Republic Lumber 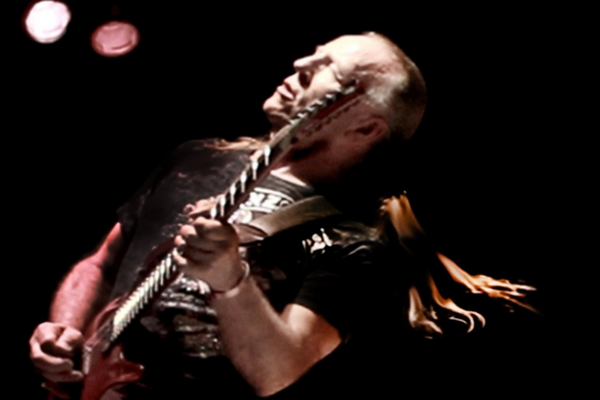 Friday, March 24, 2023 | 7:30 PM - Legendary all-American frontman and guitarist, Mark Farner, was the engine that pulled the original Grand Funk Railroad repeatedly to the top of the charts, and today he’s a platinum recording artist 30 times over. At age 70, Farner commands the stage with the same intensity and outpouring of love as he did during the summer of ’69 and his fans are still flocking to see “the Captain.” The rock patriot’s synergy and open heart still come through in epic hits that defined a generation including— “I’m Your Captain” (Closer to Home)” “We’re An American Band” “Heartbreaker” “Bad Time To Be In Love” and more. | Sponsored by: Tom, Becky, & Tim Weber & Mercy Health - Tiffin Hospital 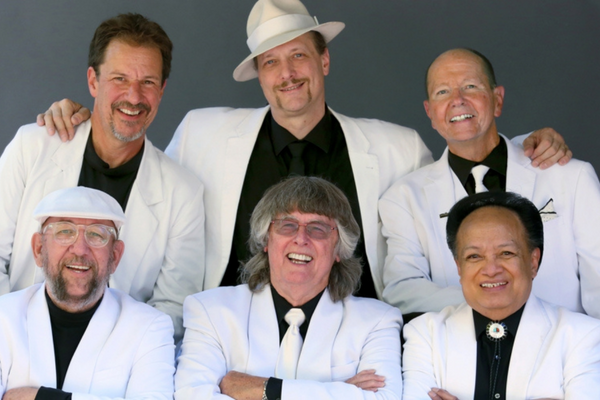 Saturday, April 1, 2023  | 7:30 PM - In 1967, The Association made history being the first band anywhere to open a rock festival – the now historic, Monterey Pop Festival. One of the most successful bands to come out of the ‘60s, they have sold millions of records and earned a number of achievements including a Golden Globe nomination in 1970 for Best Original Song – “Goodbye Columbus.” The Association has also received RIAA certifications for six gold and three platinum records. Their album, The Association Greatest Hits (Warner Brothers) is now double platinum and continues to be one of the longest best-selling albums in the history of the company. Hits include “Windy,” “Cherish,” “Never My Love” and “Along Comes Mary.” | Sponsored by: National Machinery Foundation 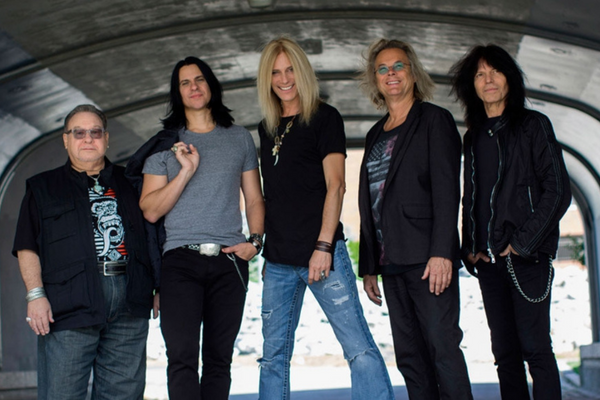 Saturday, April 15, 2023 | 7:30 PM - The Guess Who, a group that’s connected with the masses throughout a exultant hit parade spanning 14 Top 40 hits, including “These Eyes,” “Clap For the Wolfman,” “Hand Me Down World,” “No Time,” “Star Baby” and “Share the Land.” Add in fellow classics and double sided singles like their #1 rock anthem “American Woman” and “No Sugar Tonight,” plus “Laughing” and “Undun,” and the Canadian bred stateside conquerors are amongst music’s most indelible treasures who are eternally etched within the very fabric of pop culture history. “You’re going to see an excellent version of the songs and hear exactly how they should sound or be played,” verifies founding member and original drummer/songwriter Garry Peterson. “We’re coming at a new generation of fans who are seeing how the band can execute with enthusiasm and integrity.” 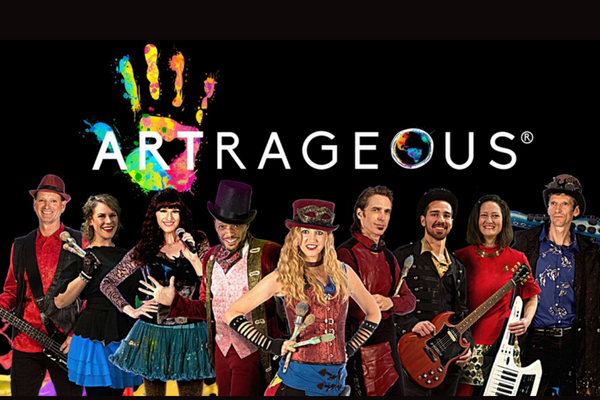 Saturday, April 22, 2023 | 7:30 PM - CBS TV raves “Go See This Show!” “You have to see it to believe it!” says The Washington Post. This one-of-a-kind “All Arts” show is amazing crowds across the globe and they are coming to your city! Be prepared to join in on the high energy, heart pounding action as arts and music collide on one stage. Artrageous, the Electrifying Art & Music Circus can’t wait to meet you in Tiffin. Be sure to Bring a T-shirt, cap, pair of shoes… to get custom Splattered by an Artrageous Artist in our one-of-a kind Creation Station! Walk away with an original piece of art! | Sponsored by: Hempy Water 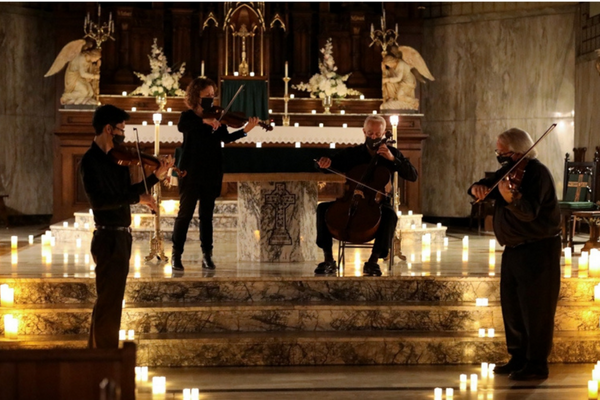 Sunday, May 20, 2023 | 7:30 PM - Enjoy an evening of classical music. A truly unforgettable event is guaranteed when these four musicians begin to play. Two violins, a viola and cello; it’s a classic combination. Program to be determined. | Sponsored by: Impact Credit Union 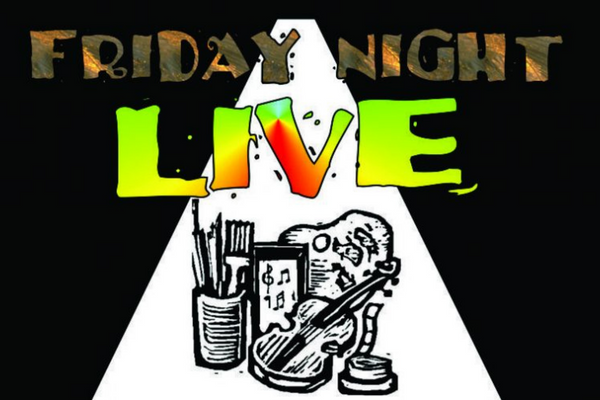 October 14, November 11, December 18 - 2022 | January 20, February 17, March 17, April 14, May 5 - 2023: Fridays at 7:30 PM - Looking for something to do on a Friday night? The National Theatre at The Ritz will host an eclectic selection of artists in an unplugged performance environment. Each Friday Night Live will feature two or three regional entertainers that may include a folk singer, a jazz musician, an aspiring singer/songwriter or some other style of artist who is passionate about the opportunity to showcase their talents. Join us for a glass of wine in this casual, intimate setting. These events will take plane in The National Theatre. | Sponsored by: Tong’s Air Conditioning, Heating & Plumbing 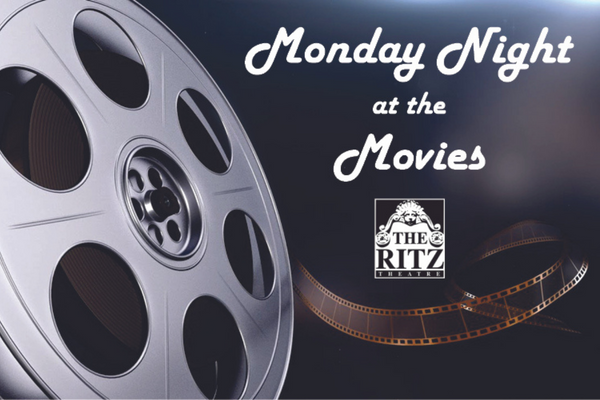 Monday Night at the Movies

October 31, November 21, December 19 - 2022 | January 23, February 20, March 20, April 17, May 15 - 2023: Mondays at 7:00pm - Take a step back in time and enjoy a classic movie on the big screen – the way they were meant to be seen. Before television, movie complexes and the internet – there were movie theatres. Take a Monday night to enjoy a nostalgic journey down memory lane. with the movies that played an integral role in the history of The Ritz.  Grand movie palaces were built with great excess including elaborate interior design, conditioned air and the incredible ambiance that became an important part of the movie-going experience. Built in 1928 to capture the huge demand for “talkies,” The Ritz Theatre became “the” place to see movies in Tiffin.